Frankenstein: or, The Modern Prometheus

Months ago when I was setting topics and some of the order for these posts, I had no idea that this year was the two hundredth anniversary of the publication of Mary Shelley’s masterpiece. Really, for someone who likes to read, works at writing and appreciates genre fiction, I’ve spent an awful number of years ignorant about the contents of the book itself.

Naturally, Boris Karloff came first before any concept of the novel. Much like the wolf-man, Dracula, the mummy, the invisible man, and all the other cinematic monster icons, I have been aware of them for as long as I can remember. The picture of Frankenstein’s monster that I carry in my head will always be Boris Karloff in that make-up with the bolts on his neck and his feet encased in some sort of hideously weighty footwear.

Obviously, the characters made iconic by Karloff, Claude Rains and Bela Lugosi originated in books. I was terrified of the movies and was somewhat relieved to discover that I could control the terror drip by reading the bases for the films. That did make me curious about the origins of the other characters (as well as that critter in the Black Lagoon and that blob from space and so many others).

Young Frankenstein appeared before I could indulge my fanciful ideas about reading Shelley’s book. Brooks had gone to the trouble of using as much of the original Karloff film sets as were available. That verisimilitude made the joke almost too much for any classic to overcome. Granted, we are talking about verisimilitude to a rendering of a work of imagination, but still, how could you turn to the book and accept it on its own terms? 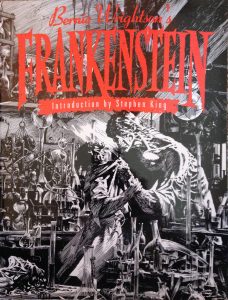 Reading in science fiction or classic literature, I kept bumping into references to this book. I knew that I was a heathen for not having read it. Forgive me, I was still in that place of youthful exuberance where I had neither the patience nor the knowledge to know what I was missing. This was just another empty space in my experience and we all grow comfortable with those one way or another. Life is finite.

Wandering through a comic book convention, I sought out a table manned by Berni Wrightson. I had a fondness for his intricate artwork. As I was to learn, fans don;t always flock to the great artists and I had no trouble spending a few minutes chatting with an otherwise unoccupied Wrightson. I bought a copy of a newly republished edition of Frankenstein which he had illustrated from his table. To this day, it’s one of my treasures you might say.

I finally read the book.

You should read it.

Since then, I’ve developed a willingness to tackle books from all over and whenever and about a lot of different subjects. I’ve become discerning, despite that description, as time passes. But, great screaming horses, this is still one helluva a great book. And it flies by like a dream. If you are only going on hearsay and think you know the story, then you are probably far adrift. It is fantastic. I mean it. Drop everything and spare a couple hours reading the book.

You’ve Got to Check This Out is a blog series about music, words, and all sorts of artistic matters. It started with an explanation. One more to go.