Think of almost any song that you liked from a 60s American pop group and they probably did not record it. They likely performed the vocals, but that was about it. Studio time cost money. Top 40 songs generated a lot of income. Many of the songs were not composed by the artists. The Beatles and The Rolling Stones and a few others set a bar too high for most other groups.

In the mid-60s, the Box Tops burst out of Memphis with The Letter, a magnificent song that they recorded, though written by someone else. Currently, it is believed the rest of their first album was recorded by studio musicians with Chilton’s vocals. 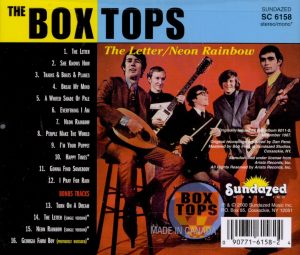 In retrospect, we know that The Box Tops had some great musicians in the band and they could write some pretty decent songs themselves. In practice, the immense success of The Letter sent the band out on a never-ending tour. As well, the record company was inspired to release three Box Tops albums in nine months. Yes, Alex Chilton is 17 in that video clip- younger when he recorded the song. He sang lead on that and Cry Like a Baby and Soul Deep. Also, he started getting the occasional song onto a record.

Understandably, The Box Tops imploded within just a few years. After all, the music thing couldn’t last. Some went off for real jobs or college. I suspect the grind was too much, also. From the outside, art might look like a great way of life, but the life of an independent contractor who only eats when they create ain’t all magic and unicorns. Sometimes, there are unicorns, but they have pointy sticks on their heads.

As all of us know,

Big Star rose out of the ashes. They went on to record #1 Record and their massive hit, The Ballad of El Goodo, the greatest song recorded during the 70s.

Playing the what-if game for keeps, what about putting the Box Tops in the studio with George Martin or an equally open-minded producer? Let them put out, I don’t know, only two albums in those first twelve months.

We got what we got and I’ll never stop listening to the Box Tops and Big Star and their many, many offspring. But sometimes it helps to keep in mind those uncredited folks who helped and hindered that music to get from their hearts to our ears.

Maybe it’s sacrilege, but I was as upset when Alex Chilton died as when John Lennon passed. For both of them, I was at peak love for their art and craft at the moment they were suddenly gone too soon. I know we don’t weigh one loss against another- that’s a fool’s game. But our hearts know when something irreplaceable has gone forever.

You’ve Got to Check This Out is a blog series about music, words, and all sorts of artistic matters. It started with an explanation. 191 more to go.