In his essay Drink Deep, or Taste the Pierian Spring, Stephen Jay Gould wrote about the actual practice of science which is so widespread across our society: from birders to telescope enthusiasts and millions more.

Common belief could not be more ass-backward. We think that science is intrinsically hard, scary, and arcane, and that teachers can only beat the necessary knowledge, by threat and exhortation, into a small minority blessed with innate propensity…. This love has to be beaten out of us… 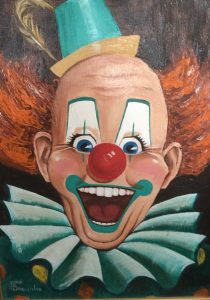 My mother started drawing and painting at a young age and kept at it her whole life. Sometimes, people paid her for her creativity. Consistently, she won contests. In addition, she filled our home with works. This picture of a clown graced my bedroom walls from before memory starts. I understand that my brothers had shifted it down the birth order as the years passed. 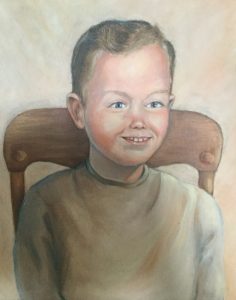 We’re never there when our parents are young, so I don’t know what demons chased her out of a career as a full-time artist, but her parents influenced many of those early choices. They probably looked around at the world around them, through their particular prejudices, and forced her along as traditional path as their headstrong daughter was going to follow. One story that she liked to tell was about working as a USO hostess during WWII, where she would make drawings of the soldiers preparing to ship out so that they could give them to their families and sweethearts. The artist finds a way. 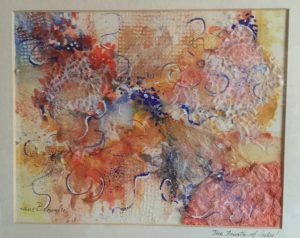 Mom spent a couple decades coming to terms with what to do with her artistic interests. Her children were getting old enough that she could pursue her own desires. She considered teaching and experimented with a dozen styles and formats. Some were more successful than others. I’m not sure that it helped having me come back from high school and encourage her to do more unorthodox pieces. When she discovered watercolors, she finally found a medium that meshed with the direction that her interests had gone. 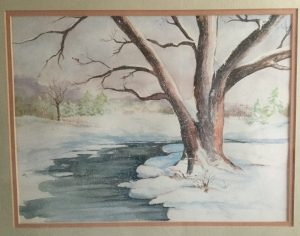 At some point, I made the shocking discovery that my mother wasn’t the only parent who engaged in art. I knew a few who strummed the guitar and warbled, but nobody took them seriously. I had a different reaction to seeing someone’s painting on a wall, however. Because I had to admit that their work was lovely. That could be the competitor inside me, but I think it’s also about coming to terms with the fact that art is a universal- wonderfully so. While a lot of people bury their creative instincts, many folks do not, which I try to celebrate now.

The other result of seeing all that creativity expressed behind closed doors is returning to my mother’s work with a different pair of eyes. Sure, that portrait of me as a child is a little disturbing. Did I really have a forehead so huge? That clown is really disturbing. I kind of appreciate the dark side shining through (which may explain some of the kick people get out of so-called naive art).

My mother made a lot of art over the years. Some of it does chart her internal life and that does make parts of it particularly interesting to those who knew her. I talked about one particular watercolor at her funeral. This one sits where I look at it every day. It portrays a bus stop. No one knows what my mother thought when she made it, but it sure looks existential to me. I’ll never know for sure. But, my mind does tend to wander. I grew up with an artist.

You’ve Got to Check This Out is a blog series about music, words, and all sorts of artistic matters. It started with an explanation. All done.

No more new additions to You’ve Got to Check This Out are planned. However, free humor, short works, and poetry post irregularly. Receive notifications on Facebook by friending or following Craig.

Images are subject to copyright.