I have been insistent all through this journey along three hundred stops on the artist path that nothing about the order matters, but that’s somewhat disingenuous. I always knew who the final three would be, perhaps the last twenty-five even. Doug and the Slugs had to be number one hundred.

Unless you were a fan of The Norm Show, which used their song as the theme, then odds are high that you don’t even know they exist. I suppose you would have heard about them from me if we spent much time together in a car.

You see, Doug and the Slugs produced two of the greatest albums anywhere during my lifetime. They are mind-blowingly good.

And it’s true that not a lot of other people agree with me. I’ve written too much about this song or that book that can serve as a bellwether about a person. For example, I’m probably not going to get along with someone that doesn’t like such-and-such song. But I’ve met mounds of people who dismiss Doug and the Slugs out of hand. It’s an uphill battle and I stopped fighting it a long time ago.

Having said that, if Partly from Pressure and Advice to a Friend don’t become instant favorites, then we probably haven’t been hearing the same world for all these years. Then, there’s the songs that just make the world a better place: Not on the Corner, Wrong Kind of Right, and To Be Laughing. 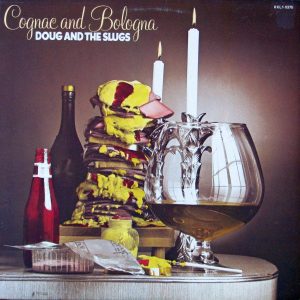 Back in the early days of HBO, they occasionally showed a music video between films. This was before MTV, so these came from bands with European hopes since those countries had platforms for such promotions. One afternoon, Real Enough appeared on my screen and I was hooked.

Unfortunately, I couldn’t find anything out about them. Friends and music store employees thought I had made the name up. A year or more passed and I went off to college where I found Wrap It! in a used music shop. Once I got it (having left Cognac and Bologna behind- these guys were an unknown entity) home, I was shocked by how it seemed to wire directly into my brain. I raced back and purchased the prior album though I needn’t have worried. No one had heard of them, even among the store employees, who all agreed that Doug and the Slugs were probably from Cleveland. How did those copies end up in a small college town in northern Appalachia?

I established from the record that the band was from Canada and didn’t have any significant presence south of the border. They eventually signed with a major U.S. label and placed some songs in the Top 40, but I don’t think I ever heard them on the radio except when I played them.

I treasured the albums (as well as any others by the band that I could locate) and the years passed. I never did see them perform live, but got a hankering for that possibility when we settled near Canada. A slow internet connection in the late 90’s provided little information and I couldn’t really work out where they would be when I would be somewhere that might be near.

So, I let a few more years go by. A little more freedom to travel came our way and I figured I better get my act together if I ever wanted to see these guys live. The internet speed had improved and easily enough I tracked down an actual Doug and the Slugs website, where they announced the passing of Doug Bennett just a couple months before.

That may have been the initial spur to writing something about the artists that I love. Virtually none of them will ever be aware of these posts which is fine. They made something and gave it to the world. Sometimes, when I’m fortunate to be near a beach, I go for a walk on the sand. I’m inevitably overwhelmed with a sense of diffuse gratitude. In a lot of ways, that’s what this blog series has been. Sure, it’s as much about me as about the artists. I started out saying that one of the most important aspects of art is communication.

As mentioned above, this is the final lap through music, words and other art.

You’ve Got to Check This Out is a blog series about music, words, and all sorts of artistic matters. It started with an explanation. 2 more to go.