What the heck is a “pearl handed deck”? I think I know, but then I think maybe I don’t.

Pretty much everyone I know that listens to Warren Zevon falls into three camps. There are those who know the chorus to Werewolves of London and maybe Lawyers, Guns and Money, likely from fraternity parties. Then, there are the folks who are deeply appalled, probably from hearing Excitable Boy. And then there are those who had to reevaluate what they thought about rock and pop. They couldn’t get enough of Zevon’s music.

Carmelita is one of the four or five most beautiful songs that I know and I really can’t relate to the specifics of the narrative, thank heavens. It is the most political romantic ballad and most beautiful protest song that I have heard. Yet, no one has written so many mind-blowing slow songs, with apologies to the Great American Songbook.

When you worked at a radio station in the early 1980s, you were never alone with an appreciation for Warren Zevon. I leaned toward the rockier tunes because that was me. One of the female DJs cornered me after my show and lectured me that I was missing the boat. I think she may have sat me down and made me listen to Accidentally Like a Martyr. I sat there and wandered what this song said about her, but I never did find out. 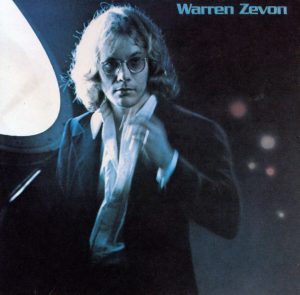 Hula Hula Boys is a heart breaker. Did I mention that Zevon’s penchant for parallel melodies is endlessly fascinating and lovely?

the most beautiful blessing song ever written? Anyone can sing it, but if you’re fortunate, you’ll get to hear Jill Sobule in your drams. This my benediction for us all.

Of course, Zevon managed to use the word “brucellosis” in a song. I might have loved him just for that.

Every generation feels important, though some get more publicity for it than others. Part of me believes that artists like Zevon gave us permission to explore the boundaries of art, but they also reminded us that you needed to work even harder if that was your choice. Really, artists are always coming along with that message, though our modern publicity machines don’t always share their message in the way of freewheeling commerce did when selling records briefly felt like a license to print money.

Not long after Zevon died, a friend loaned me a biography assembled from remembrances of people that knew him. Of course, I devoured the book. Honestly, it played out pretty much as you might expect if your time on Earth paralleled Zevon’s. Those lyrics and that music came from a wealth of experiences and troubles and training and study and hard work.

You’ve Got to Check This Out is a blog series about music, words, and all sorts of artistic matters. It started with an explanation. 20 more to go.