This is not the HBO show that seems to keep spitting out clips on social media (with confusing political appeal) despite the show’s cancellation a little while ago. This is a Canadian series that no one seems to sample on social media, probably because it was cancelled some time ago. Also, it was really funny, as opposed to that other show.

A weird spell passed through our lives a long while ago and we were suddenly hit with a bunch of Canadian television shows that we rather enjoyed. That may have been proximity-based. Quite probably, regular visits to Ontario played a role. Those visits were also proximity-based. Those trips slowed down after we noticed that it gets warmer if you head south rather than north. Still, we can be found floundering around Toronto on occasion.

The best of the Canadian shows had to be Slings & Arrows and The Newsroom, which remain some of the most enjoyable and brilliant television that I have seen. They both provided that same thrill as watching the top tier episodes of The Mary Tyler Moore Show and All in the Family. If that means nothing to you, then we’re unlikely to understand one another anyway. 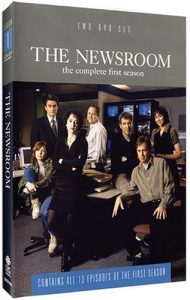 most description of The Newsroom are bound to make it sound remarkably like The Mary Tyler Moore Show. As I’ve said, that’s great as far as it goes, but Finkleman takes his show well beyond expectations. The format and experiences of the characters appears to start from places that we expect from a lifetime of television viewing. Even so, he consistently twists and turns, pulling in ideas that should not belong.

I do wonder what the first audiences thought of the show. It’s not early to the concept of the unlikable protagonist, but it is willing to take that places that only Dabney Coleman seemed to explore previously. How do you succeed at television while seemingly trying to fail?

No one can claim to understand what people will watch on television after Seinfeld. I’m not saying that it didn’t deserve success-only that it feels truly unpredictable. Moreover, how do you know what will attach enough to the psyche that people will want to keep a show alive (or return it to life) after all indications are that it should go away?

Finkleman brought his show back after about a decade’s hiatus. It was a weird show the first time around and it got weirder. I think that’s great. What I also think is fantastic is that the show was brought back at all.

Popular taste is strange and it may seem wrong-headed to use this as a barometer. Yet, I can’t but gaze in wonder at a show that still managed such popularity. We spend so much time complaining when this show or that show feels like they are playing to our baser selves that I wonder why we never look a little higher with our critiques.

You’ve Got to Check This Out is a blog series about music, words, and all sorts of artistic matters. It started with an explanation. 30 more to go.