I’ve read poems by five or six of these folks and go out of my way for two of them. Honestly, I haven’t a clue about the last four. While maybe I should feel bad about this, I don’t. 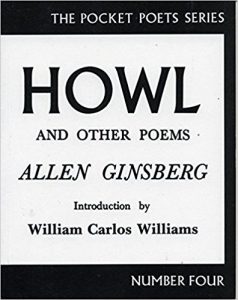 is a long way of saying that we don’t generally remember our poets. We don;t particularly celebrate them either. If they cross over into the world of personality, then our culture has something with which it can work. Charles Bukowski did this for a while. Better yet, a poet can manage a guitar or piano and we call them a singer/songwriter. In either case, we forgive the quality of the poetry in favor of the performance.

Ginsberg had the performance part down. He also managed to appear at moments when television cameras would be on. I knew who he was from the national news before I knew that he was a poet. Really, he seemed like another one of those too old people hanging around youth movements of the moment- like William Burroughs, Timothy Leary, and Terry Southern. All sorts of “adults” popped up on college campuses seeking counter-culture verifieds.

Lasting in the memory is really what we want from our poetry. That proves a deft trick because we don’t always grant a poem more than a cursory thought. Perhaps the other part of the trick is hitting an audience when they are young. I’m not sure my brain is made for memorizing stanzas anymore. For that matter, I’m not sure I have conversations anymore where dropping in a line of poetry does anything more than bring matters to a halt.

And then I read Howl. I’ve been wrong before and I’ll be wrong again.

You’ve Got to Check This Out is a blog series about music, words, and all sorts of artistic matters. It started with an explanation. 85 more to go.