Music and lyrics by Randy Newman

The concept album started with Woody Guthrie, Frank Sinatra, the Beatles, or the Who, depending on what you think a concept album is. Definitions and debates abound. In an era in which the term album is anachronistic, I suppose the simplistic way to look at it would be to say that it is a selection of songs unified by a concept. This does open the Pandora’s box of seeing if you can connect every song on a CD by six degrees or less. (As a side note- that is how you torture a metaphor.) So, when an opera or a musical is recorded, isn’t that a concept album. For that matter, what about song cycles by the likes of Franz Schubert? Is one a recorded musical a subset of the concept album? Vice versa?

The concept album really exists as a way to add gravitas to a recording. Tommy was the way for Pete Townsend to create high art because his day job was making music for the masses, right? We can take Dust Bowl Ballads more seriously because we can… define it?

As someone who writes in a lot of different formats, I have been asked how I know whether or not something is going to be a play or a poem or a novel or a short story or whatever. I don’t always know the exact format, but two things I can usually tell right off. If I am working on demand, then I know exactly what they are looking for. Whether or not that is the case, I also have a pretty good idea if the concept feels big or small. 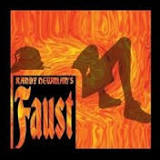 has worked brilliantly all over the music map. We may even share those two factors I mentioned in common. When he works on a soundtrack, he know the boundaries and works to them. For songs, he has that down pretty well, if you consider the wonderful ones he has composed over the years: Feels Like Home, I Love L.A., Louisiana 1927, Sail Away, Short People, The Time of Your Life, You Can Leave Your Hat On, and You’ve Got a Friend in Me.

But then the big idea hits and the artist wants to tell a fuller story. The history available about Randy Newman’s Faust suggests it was born a song cycle before becoming a musical. Various attempts were made at adding a book to the songs and they never quite lived up to Newman’s majesty as a composer.

That’s completely fine. Those bursts of big ticket inspiration can be almost complete on their own. Listening to the original recording from 1995 is a full experience. The story of Faust has inspired more versions than perhaps any other. The miracle here is making it seem fresh. Grafting more text ends up creating resonances with earlier works that are unnecessary.

You’ve Got to Check This Out is a blog series about music, words, and all sorts of artistic matters. It started with an explanation. 185 more to go.