“He writes he writes he writes and his paper remains pure and white.”  So wrote Gertrude Stein in The Lost Notebooks of Alice B. Toklas in which she inferred the thoughts of her confidante, Alice B. Toklas, via osmosis.  Of course, Stein was writing about one of the least read and most unpublished authors of our time, Louis Bowel.  He would have it no other way.  Countless authors have suffered through an extended Bowel Movement, brought on by deleterious behavior, but few have been as grateful for the experience as the namesake of the Non-Writing Movement.

So many authors, adequate to mediocre, have struggled with the pen and paper, but few have come by that struggle as innately as Louis Bowel.  (Pronounced with the emphasis on the second syllable.  “It has been said properly when it sounds like you’ve knocked the wind out of a terrier in mid-bark.”  Louis Bowel in Authors and Their Movements: a Turgid Study.)  Rare is the scholar who has reviewed Bowel’s oevre and is not grateful for its brevity.

Louis Bowel first came to prominence on the Right Bank in Paris where he often sat watching the expatriate Americans picnic across the Seine.  He would arrive shortly after sunrise and begin building a tidy pile of small pebbles.  As the Americans arrived, Bowel would wait patiently while they unpacked their baskets and spread their blankets for a pleasant repast by the river.  As the first bite was taken, the Americans found themselves bombarded by a storm of pebbles.

Bowel kept to this routine until his famous encounter with Hemingway.  Refusing to retreat in the face of Bowel’s barrage, Hemingway, filled with rage and slightly bruised, plunged into the Seine and swam across the river toward Bowel.  Not being a fool, Bowel was long gone by the time Hemingway arrived.  Neither one was ever to have a kind word for the other.  “Bowel had no output,” wrote Hemingway in A Moveable Feast.  “He smelled like a donkey,” countered Bowel. 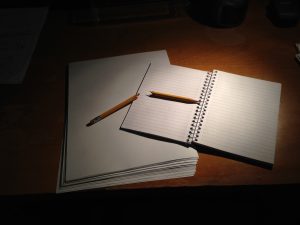 Bowel spent the succeeding years writing little of note.  He supported himself with stints in a German cabaret show and in a Paris jazz club doing little for his reputation as an author.  On the other hand, Bowel was able to establish himself as a tuba player of some repute.  Only when Gertrude Stein invited him to her apartment for a recital did Bowel exhibit the first signs of interest in writing.  Apparently inspired by a recitation given by Stein, Bowel went home and wrote his great manifesto, Why Bother.

Few people have been able to read Why Bother and not feel the full pressure of a Bowel driven to distraction. He pounds away again and again, driving home the one great inspiration of his life– apathy.  This was a man who had nothing to offer and wanted everyone to know it.  Scholars have long been bothered by the lack of a question mark at the end of Bowel’s title.  Professor Ludwig Van Buren, Heidelberg University, has deemed it “a damn foolish thing to worry about,” while Professor Frank Happenstance, Mishkatoolah University, writes that “the work is not improved by the omission.”  Ultimately, this would be the only work Bowel would publish in his lifetime.  His notebooks were discovered posthumously.  They were initially deemed illegible, but were recently published by the University of Chicago Press as A Hundred Monkeys Pounding on Typewriters (And We Mean No Insult to the Monkeys).

World War II arrived, leaving no marks or fissures on Bowel who remained in Vichy France.  In later years, he would claim to have considered joining the resistance.  Even this small gesture allowed him to maintain the level of apathy to which he had grown accustomed and Bowel spent the war years ignored by the Nazis.

Why Bother served as a powerful inspiration to legions of graduate students after it first came to prominence in the late Forties.  At that time, Evelyn Waugh considered writing, “For a while there, it seemed like the only new work was being produced in newspapers and they were almost impossible to come by.”  No published author was willing to associate with Bowel, perhaps fearful of falling under the seductive spell of his tuba and the passionate melancholy of his message.  However, a slow procession of young Americans traveled across the Atlantic Ocean to study at the feet of the master.

Many scholars have attempted to capture the inner reality of Why Bother and have failed.  Let me be another.  Bowel began with the conclusion that no person relies so heavily on the power of language as an author. Authors collect language, plowing through it like a dung beetle through a rubbish heap.  Each word, perhaps each syllable, maybe even every letter, has a distinct essence that the author channels.  The true author uses only the most powerful words and the ageless giants require the fewest words to express their meaning.  When judging an author’s collected writings, the reader’s opinion should be based upon the slimness of that output.  In fact, the critic should dispense with actual reading.  Rather, a scale should be sufficient.  Bowel concluded that the true author should merely have to identify himself as an author.  If he has no actual output, then so be it.

In fact, a true literary genius has found the purest expression and should feel no need to put it down on paper.  The struggle for the literary genius is to find some way to occupy his time.  A great author is therefore found in sidewalk cafes, drinking coffee and smoking cigarettes.  He should be staring off into space and ordering so little that the waiters are annoyed. Bowel indicated in his final paragraph that the appropriate behavior of a literary aficionado was not to buy books by favored authors, but rather to purchase pastry, coffee, and cigarettes for those fine authors sitting at sidewalk cafes throughout Paris, particularly on Rue Jardin in the late morning.

Naturally, none of Bowel’s hangers-on went on to write a single word of note, bringing the Non-Writing Movement to full flower.  The Fifties were a time of great joy for Bowel.  He was surrounded by disciples who were willing to pay for his meals and listen to his frequent soliloquys.  “He seemed genuinely disinterested in anyone else,”  says Eugene Bevaqua, one of Bowel’s followers at the time and currently working on his doctoral thesis.  “I remember so many nights sitting around waiting for something to happen.”

Unfortunately for Bowel, his downfall was sudden and swift, for a Judas resided in the ranks of his collegiate admirers.  Young Beltham Barium II was to reveal Bowel as a charlatan.  Barium’s father owned a string of chalk mines in the American southwest and Beltham was due to inherit a large organized labor problem sometime in the near future.  Louis Bowel welcomed the young Barium with open arms, recognizing in Beltham someone who could afford to buy a great deal of pastry.

Barium, like so many of his generation, was infatuated with Why Bother.  He saw it as something he could wave in his father’s face whenever discussion of finishing college arose.  It was only after the elder Barium cut off his allowance that young Beltham began to consider the implications of Why Bother. Unlike anyone before him, Beltham Barium II gave serious consideration to its content as a statement, rather than as an excuse.  He brought all the force of a freshman logic course to bear in his own analysis and he decided to write down his conclusions.  He accused Bowel of self-contradiction since he had actually bothered to write down his denial of the value of writing.

The attack came out of nowhere as far as Bowel was concerned.  He was constricted, unable to respond in kind because any written response would be viewed as a betrayal by his followers.   He began telling his followers that reading was just as bad as writing, but his followers could not help but notice that Barium had been offered a choice of professorships at various prestigious universities based upon his critique of Bowel.

The words began to flow and Bowel was a hot topic in the literary establishment.  Bowel himself gave a series of lectures at Harvard in the spring of 1959, consisting of a series of improvisations on the tuba interrupted by long breaks for smoking. Unfortunately, this time proved to be a last burst of fame before oblivion for Bowel.  None of his followers who had moved into the academic environment felt any need to produce any scholarly work once they had attained tenure. By 1961, Louis Bowel had been forgotten and authors were writing more words than anyone cared to read.

Today, Louis Bowel no longer lectures, but he continues not to write.  He gave up the tuba in 1963, when he realized that he “despised the sound of the thing.”  He receives few visitors in his small apartment in Paris and those that do visit are treated rudely.  He seems comfortable with his legacy of apathy, although he admits that he would have done one thing differently.  “I would’ve fought Hemingway on the banks of the Seine.  That story’d be worth a lot of free dinners.”